Council officers and councillors accompanied by the NEGC team, recently visited Poundbury in West Dorset to learn from the experiences of the Duchy of Cornwall in developing an urban extension to Dorchester.

Poundbury has a prominent reputation amongst planning and development professionals chiefly because it set the trend for delivering larger scale developments.

However, it tends to polarise views; some see the “unashamedly traditional” architectural style as regressive whereas many wholeheartedly support the traditional English village as a development goal worthy of pursuit. All developments are of course progressed within their local context, so it was important to focus on the on the principles underlying the approach. 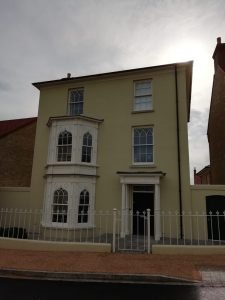 The first impression of arriving at Poundbury is that the buildings are undoubtedly impressive. The Duchy has put a huge amount of effort into achieving architectural variety whilst also retaining a unity of place; a typical street scene is typically filled with Victorian, Georgian and Flemish vernacular yet all these styles manage to complement each other and sit harmoniously as a whole.

The attention to detail is matched with the selection of quality materials used with local stone, brick and slate seemingly used throughout the development. Another obvious strength of Poundbury is its integration of different uses; residential streets are pepper-potted with retail, commercial and leisure uses giving the impression of vibrancy and activity at all times of the day.

Poundbury’s critics may not always agree on its aesthetic qualities, but many are in agreement that with hindsight the development could have done certain aspects better. Some people say that traditional architecture and medieval street layouts simply do not sit comfortably with our present concerns for environmental sustainability – it will come as no surprise that Poundbury’s buildings lack solar panels or other forms of renewable energy provision. Furthermore the layout of the development is not necessarily conducive to sustainable transport aspirations – there is a lack of areas to store bicycles and no dedicated lanes for cyclists or segregated public transport lanes. Lastly, even by the Duchy’s own admission, some of the social infrastructure such as the primary school would ideally have been put in place earlier.

Some of these criticisms may be unfair on Poundbury. After all many of these issues are inherent in urban extensions and some of the infrastructure items that would improve connectivity and raise the scheme’s sustainability credentials (such as an integrated rapid transit system) are normally only capable of being delivered through strategic large-scale development, such as new settlements, situated on a long term growth corridor.

Many of the Duchy’s experiences are heeded by the North Essex Councils NEGC, particularly the importance of putting infrastructure in early and ensuring not only the integration of communities, new and old which was an early issue, but also the integration of different uses amongst residential areas including a genuinely effective tenure blind approach for the affordable housing to create visual interest and vitality.

In conclusion the lessons from Poundbury are numerous but the clearest message from the visit is that when a visionary land owner acts as a master developer, quality of place results, and that is certainly a development goal worthy of pursuit.